The Karl Marx Play and Others

Futz and What Came After

Futz and Who Do You Want, Peire Vidal?

Futz and What Came After

I WASN'T THERE when tragedy was goat-song, were you? But I have a hunch that with all the great ones it persists, an animal presence thumping and throbbing 'neath the surface, then truly breaking out. That's when the hair rises in all the glory and wonder of theater and the poet's art. Laughter fills us, but our eyes are on the knife above the goat's throat, or on the priest's mouth stuffed with macaronis turning into blood, or on the hairy feet of a crazed Eastern saint spinning off into dark circles inside some northern mind, or on those shadows in the barn of Cyrus Futz that drive a culture mad. Rochelle Owens has caught hold of a truth about our nature, and she rides it through these plays, creating a new theater as she goes and a world of her own. Rochelle Owens' "world" and her theater of impulse! But don't be fooled into thinking that "you" aren't part of it. "You" are and "I" am too: looking back at history with her own eyes until we realize that the world she's showing us is in us all.

Her first play, Futz, announces the theme: man as animal, the talking, questioning and self-destructive animal—cruel-one of all our dreams and fears. But it is man too who makes love, creates it and gives it its name. Still, perversity remains love's sister, and cruelty is the image of love in the mind's steamed mirror. None of it comes easy, for man learns to lie (both to himself and others) even as he learns to speak. All Cretans are liars, said Epimenides the Cretan, and the curtain of darkness fell down.

So there's "love" to begin with—that love which, wrote Dante, "is the seed of every virtue in us, and of every action deserving punishment." In Futz the drives, open or hidden, are sexual (virtuous too-and oh so cruel), and Futz himself, who cries at his tormentors, "I love Amanda [the sow] because she's good," emerges finally as man-of-values, defender of all the grubby wonders of our flesh. Goat-song or pig-song, he is the old animal god who dies to save the secrets of the soul. Yus Yus Yus ooooooooooinkh, Futz bellows in extremis, and his murderers ("mean folks" who, "wanting to love the animals the way I do . . . hate my face"), pig-like, respond, YUS Yus Yus.

The cries and the wild-words of Futz inform the later plays too—the "what-came-after" of the present volume—only here (very naturally) the range of drives and longings is expanded, and the plot (as they say) begins-to-thicken. Sex, hunger, flight, aggression, the need to rule and to be ruled, to love and devour, all these are now in operation—and the struggle they engender is seen also as one between races, cultures and nations. But there is more than thesis writing here, because the playwright, as poet, has allowed herself the danger of an involvement in the very madness she portrays. She has remembered too that poetry and theater flourish at the extremes of our human and animal natures, where even the unlikely is true. For with all her 'mad and maddeningly believable histories and geographies—those Greenlands and Africas and Istanbouls and Asias of the mind—this is no mere exoticism she's serving us. To put it mildly (and not to repeat again the list of modern torture chambers from Auschwitz to Vietnam), there is nothing her white goddess, Beclch, does that the collectivity ( all of us, whether we like it or not) hasn't done already in the course of this or any other century. Do away with cruelty and the destructive instincts of the trapped animal, and these plays will be obsolete in their themes; until then, we need poets like this one, to fight cruelty in its own terms and language, to expose it with all that laughter and horror that have been the tools of the great comic poets from Aristophanes to Ben Jonson to (why not just say it?) Rochelle Owens.

This was one of the pioneering plays of the 1960's off-Broadway movement. I love the play for its unique interplay of thought and language, but also for the fact that Ms. Owens wrote it in the late 1950's when she had almost no connection to the Broadway-dominated theatre of the time. She wrote it in her off moments while working a dreary office job, completely on spec and without any prospects of production. The type of theatre that could produce it had yet to be invented. So it's visionary on many levels. 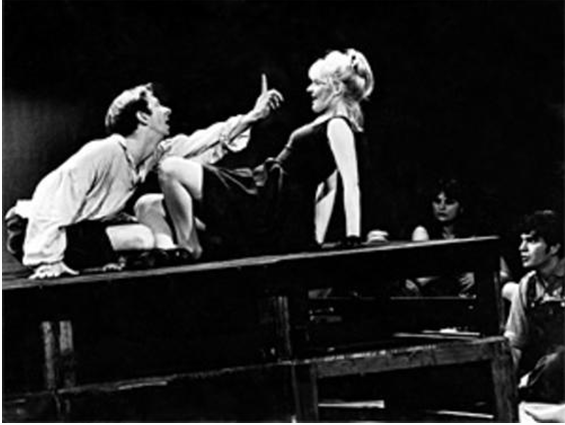 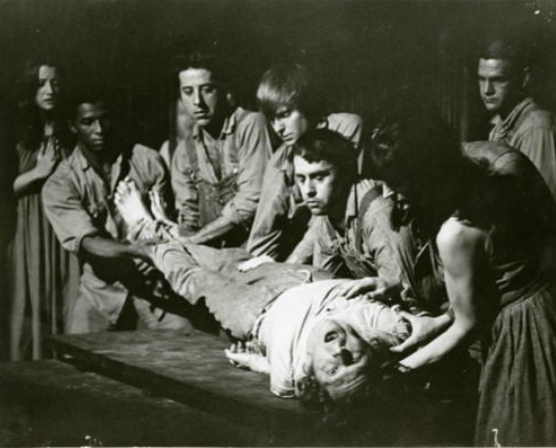